Tarragona is a small city (around 132,000 inhabitants), located about 100 km south of Barcelona. It is the capital of Catalonia’s southern province, also called Tarragona. A bright and comfortable town, it opens onto the Mediterranean seaboard. In addition to a past rich in history and tradition, modern Tarragona is one of the centers of tourist, industrial, commercial and cultural activity in Catalonia.

During the period of the Roman Empire, Tarragona (Tarraco) was one of the most important cities of Hispania, as the capital of the Roman province Hispania Citerior or Hispania Tarraconensis. Notable remains from this period include the city walls, the Amphitheatre, the Circus, the Praetorium, the Provincial Forum, the Colonial Forum, the Roman Theatre, the Necropolis and the Aqueduct (also known as El Pont del Diable, the Devil’s Bridge). There are also several other sites of Roman remains on the outskirts of the city: the Tower of Scipions (Torre dels Escipions), Medol Quarry (cantera del Mèdol), Centcelles Mausoleum (Mausoleu de Centcelles), the Villa dels Munts, and the Berà Triumphal Arch (Arc de Berà). Tarragona constitutes one of the largest surviving concentrations of archaeological sites pertaining to Roman Hispania, and in 2000 was declared a UNESCO World Heritage Site.

During the Middle Ages, Tarragona was an important military base and religious center, becoming the dominant archdiocese in Catalonia. Even today the magnificent Cathedral and the still very popular Holy Week remind us of the influence of the Catholic Church here.

Economic activity revolves around the petrochemical industry and tourism. Tarragona has one of the biggest petrochemical complexes in Southern Europe, boosted by one of the largest commercial harbors in Spain. Tourism has gained an increasingly significant foothold here too,  as the biggest city on the so-called Costa Daurada, an area of tourism which includes many sandy beaches and coastal villages, such as Salou (16 km), Cambrils (22 km) and Altafulla (15 km), plus contemporary visitor sites such as Port Aventura theme park (14 km from Tarragona).

Tarragona also has a bustling cultural life. The tradition of human towers (castellers) is deeply rooted in the city. There are in fact four groups of these human towers (colles castelleres) and the International Human Tower competition is held in the city every two years. The festivities of Sant Magí (August) and Santa Tecla (September), as well as the Roman culture festival Tarraco Viva (May), are also highlights of the city’s cultural life.

Many sites for tourism and culture are situated in the old town (Part Alta), in the surroundings of the Cathedral, although restaurants offering local cuisine can be found throughout the city. Also of note is El Serrallo, the old fishermen’s neighborhood, where some of the best fish and seafood restaurants are located. If sun and sand is more to your liking, there are four white-sand beaches within the city limits; Tarragona has a warm and temperate climate, with average maximum temperatures of 20ºC in April. 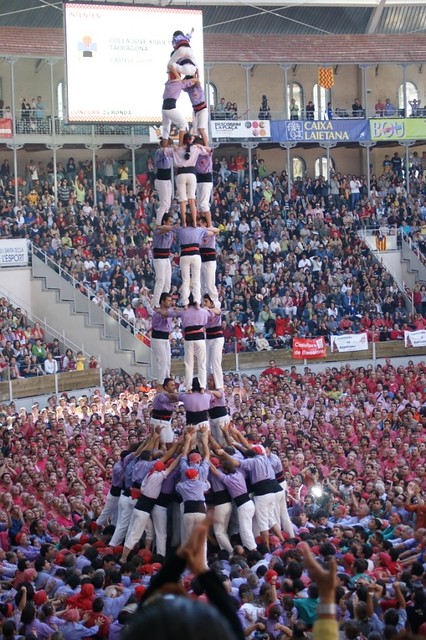 Apart from the city itself, there are many places of cultural interest to visit near Tarragona, such as the medieval village of Montblanc (36 km), and the Cistercian monasteries of Poblet (47 km) and Santes Creus (35 km). Very close to Tarragona, the city of Reus (15 km) has several interesting examples of Modernist architecture. There are also many beautiful landscapes to visit, not least the wine-making region of El Priorat (52 km), with the impressive Montsant mountain range, and a little further away the natural park of the Ebro Delta (89 km), designated a UNESCO Biosphere Reserve.